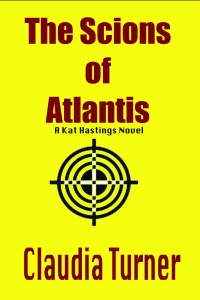 Former CIA analyst, Kat Hastings and her investigative reporter husband, Robbie O’Toole, have been in hiding for a year, trying to elude a brutal hitman seeking revenge. They’re discovered and decide to separate but first, Robbie tells Kat about important information he needs her to find and protect at all costs. As Kat reluctantly boards her plane without Robbie, he calls and tells her he’s been found, and she must search his duffle bag. She hears a loud whack followed by his agonizing moan, and then the line goes dead. She locates a slip of paper on which is scrawled, “The Scions of Atlantis.”

James Treadwell, an ultra-wealthy Boston businessman and a friend of Robbie’s from the sixties has promised Kat safety in return for her analytical skills. Once a radical, Treadwell is now forming a new political party to counter the partisan politics crippling the nation. He claims his party will be one of integrity and unification, but Kat starts to wonder whether he is a member of the Scions of Atlantis, which Kat learns is an international cadre of rich and powerful puppet masters who pull the strings of the world’s leaders.

One of the rising recruits to Treadwell’s new party is Arab-American Adam Zuabi, who, despite the appearance of living the American dream, is actually a secret operative, the sword his father Adheem will use to decapitate the US government. To save the country and those she loves, Kat must unearth Zuabi’s plot, expose the Scions and ascertain Treadwell’s true motives but first, she must overcome her own demons.

The Scions of Atlantis is told from Kat Hasting’s point of view interspersed with third-person narratives of Zuabi’s unfolding plot and interlaces today’s headlines with the activism, music, and idealism of the sixties. The Scions of Atlantis will appeal to everyone who is concerned about current events in today’s world.

The Scions of Atlantis is a sequel to Scars and Stripes Forever, rated five-stars on Amazon.

“Like all good historical thrillers, The Scions of Atlantis pulls us into the center of an impeccably recreated world, gives us characters to care about and worry over, and then touches off an explosive series of events that are as unthinkable as they are believable. A worthy successor to Scars and Stripes Forever.”
–Marge Davis PhD,author of Sportsmen United: The Story of the Tennessee Conservation League.
“WOW! Claudia Turner has expertly and insightfully harnessed the current social and political angst of our nation … to create a riveting political thriller that rings hauntingly familiar to the reality of our times. I highly recommend this book!”
–Bill Westerlind, President, Artworks, Westfield, MA

Claudia Turner was born in Baltimore, Maryland. She earned a B.S. from Bates College, an M.S. from The Pennsylvania State University and a PhD from The Johns Hopkins University. At various times, she has been an athlete, a teacher, a scientist and finally, a writer. Claudia lives in Massachusetts where she enjoys spending time with family, friends, and her dog, Rosie.